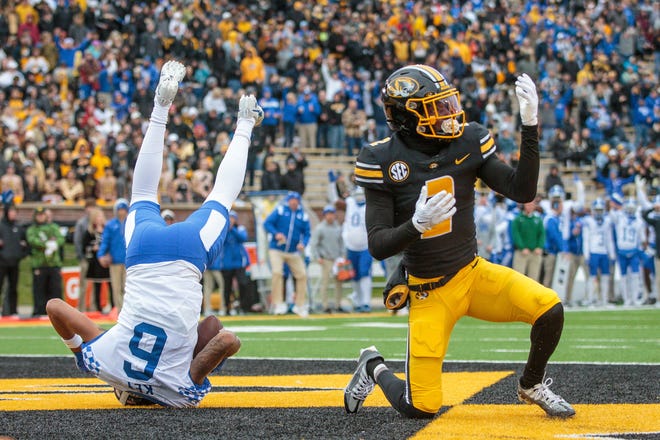 It took a while for the attack to get underway. Fortunately, the Missouri defense was there for the entire game.

Neither could save the Tigers from their special teams.

Here are our post-game numbers from Missouri to Kentucky’s loss on Saturday.

The Defense of Missouri

This game was somewhat reminiscent of the Kansas State game. The Missouri defenses did everything they could to keep the counterattack in check. The Tigers did that by taking four sacks in the first half.

But when a defensive unit is on the field for most of the game, they can eventually wear out.

Chasing Chris Rodriguez was Kentucky’s offensive force in last year’s game against MU, and it was Saturday. Because no matter how improved MU’s defense has been, Rodriguez is a good defender.

He made the first downs and yards, but Missouri did well to keep the UK in check.

When the offense finally scored and matched the success of the defense, the defense didn’t back down. The Tigers defense followed the attack’s touchdown with a three-and-out.

Later, when Kentucky was driving and the MU defense was close behind, Missouri forced a three-and-out to get the ball back into the hands of the Tigers offense. At that point, it’s up to the violation.

This team will never lose because of its defense.

Better late than never, we suppose?

It took almost the entire game for the Tigers to attack. When it did, it was efficient and played to its players’ strengths.

Cook took what he got and then hit vertical throws in the fourth quarter. Those pitches accounted for both his touchdown runs.

Still, it wasn’t like those were the only opportunities. There were plenty of opportunities for Missouri. Late in the first half, MU started a drive on the Kentucky 47-yard line. That drive crashed and ended with a failed fourth call.

It took until the start of the fourth to finally hit a score in the end zone, and it was Cook pushing in a one-yard touchdown.

Taking three quarters to sustain any kind of offense will not win games in the SEC. But when the Tigers got going, they went vertical. The passing game began to open up and Luther Burden put in a big play down the seam to get MU to the UK’s 31-yard line.

But the horizontal plays were the aspects of the attack that slowed the momentum. Fortunately, Cook’s heart never wavered, even after a poor turnover in the first half.

Harrison Mevis did his job. His strong leg kept Missouri at a striking distance of points.

But strange kicks and a personal foul on a punt helped sink Missouri.

The squib kicks gave Kentucky a great fielding position and helped lead the score. The personal foul on the punt, albeit a strange one, was the right one. The unit must know the rules.

Cook struggled to get anything going. He had 19 passes in the first half and was even injured after two British defenders swallowed him on a sack.

But Cook continued his piece of solid play.

He rallied in the fourth quarter and scored two hasty touchdowns to give MU a lead. He got there by taking what the defense gave him.

He led a game efficiently and effectively. He tried not to do too much. Notably, when UK gave the Tigers the ball near midfield, he hit Burden for a long win. He took his time in the bag and calmly threw a touch pass. That’s the passerby who, according to Drinkwitz, has existed all season.

The bad clumsiness keeps him from getting an A, but a performance of two touchdowns, after shuffling an injury, is the kind of brave performance that wins games.

On a day when Will Levis’ athleticism was going to cause trouble and extend the game, MU’s defensive backfield was there.

Rakestraw split a tackle for a loss and got a key pass break when the MU defense tried to get the ball into the hands of the attack.

That series probably earned Rakestraw some NFL money on the other side of Kris Abrams-Draine.