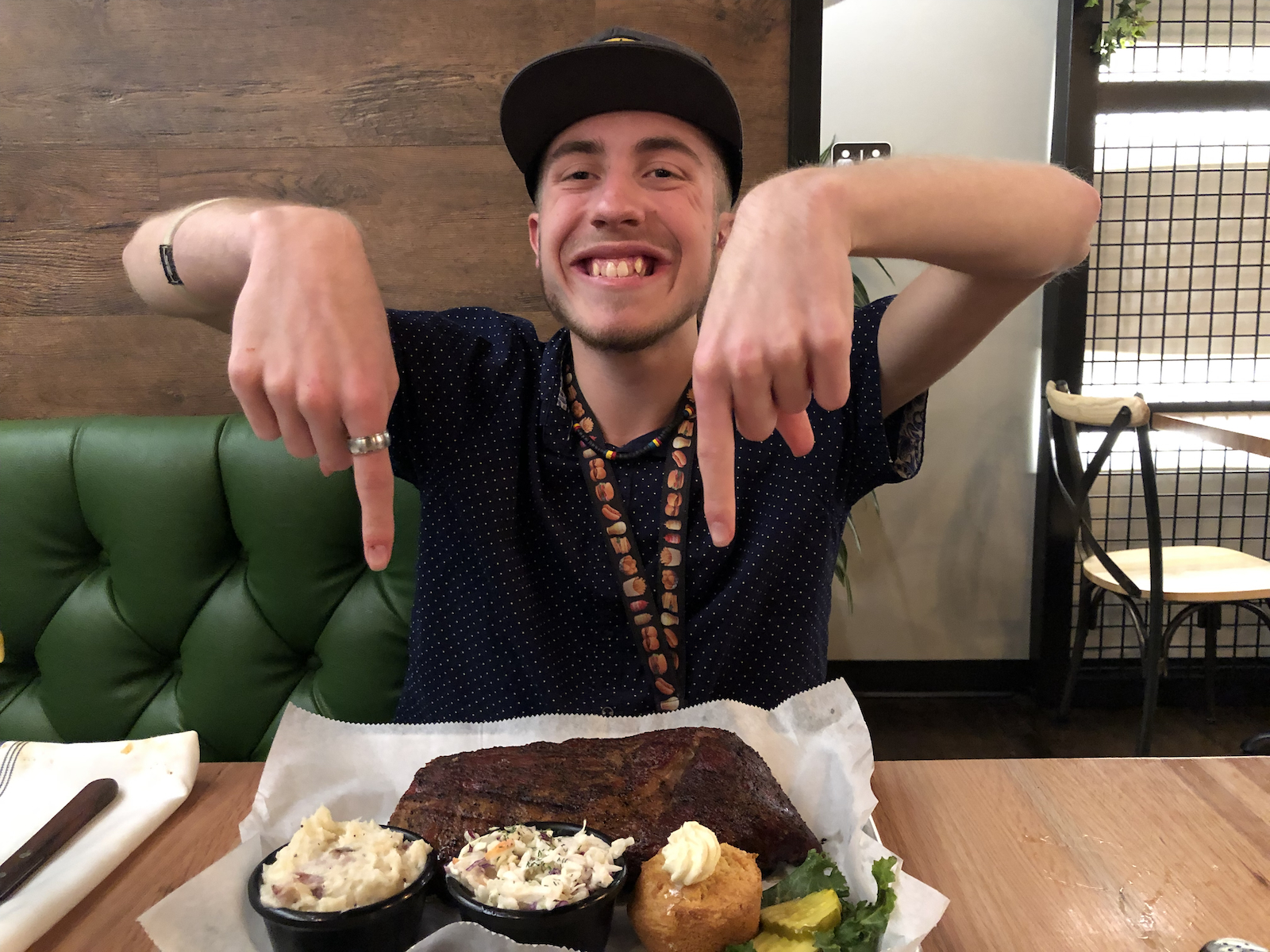 They serve a variety of tasty barbecued meats such as brisket, ribs and chicken. They also have great sides and appetizers such as logs, smoked mozzarella sticks, mashed potatoes, mac ‘n cheese, and burgers to name a few.

I met the owner, Mark Timber. He operates the restaurant with his wife Judy.

Mark told me he was inspired by chefs like Scott McGlinchey, who ran a barbecue restaurant called Q in the early 2000s. Mark was super nice and positive too. He has a real passion for what he does.

Mark said that in addition to the restaurant, they also have a Double B’s BBQ food truck that serves many of their menu items at festivals, farmers’ markets and other events all summer long. They also cater for many private events.

Inside the restaurant it is very modern. They have many comfortable booths and seating for their customers.

There is also a large bar where customers can enjoy their drinks and food.

Judy was in charge of the decor in the restaurant and she chose different pieces of furniture and lighting from different countries such as Denmark and Germany.

I had a very friendly, helpful and cheerful waitress named Nikki. She was very positive and I enjoyed talking to her about the food.

I also had the pleasure of meeting the kitchen manager Ryan. He took the time to talk about the barbecuing process in the restaurant. He also showed me the two smokers the restaurant uses to cook their meat, and how they work. He is an extremely hard worker and is very passionate about the food he makes for their customers. Ryan said they make all their barbecue sauces at the restaurant. They also won a prize in 2020 for the best macaroni and cheese.

The jalapeño dip was very cheesy with a bit of spice.

The wings were soft with the perfect smoke flavor.

For my main course, I tried their delicious semi-stretch baby back ribs, with coleslaw, mashed potatoes and cornbread. Ryan also brought some macaroni and cheese for me to taste.

The ribs had a lot of meat on the bone and good flavor. The coleslaw was very fresh in taste. The smashed potatoes were very creamy and buttery. The cornbread was sweet. Mark said they add honey to their recipe, and that’s what made it so delicious. The macaroni and cheese was out of this world.

Mark told me the most popular dishes are their beef brisket and baby back ribs. The meat is fresh, never frozen, and they get it from Wichita Farms in Illinois.

I would highly recommend giving Double B’s a try as the restaurant has a very comfortable atmosphere, the staff are very friendly and accommodating, and the food is great! You will not be disappointed. I loved this restaurant so much.