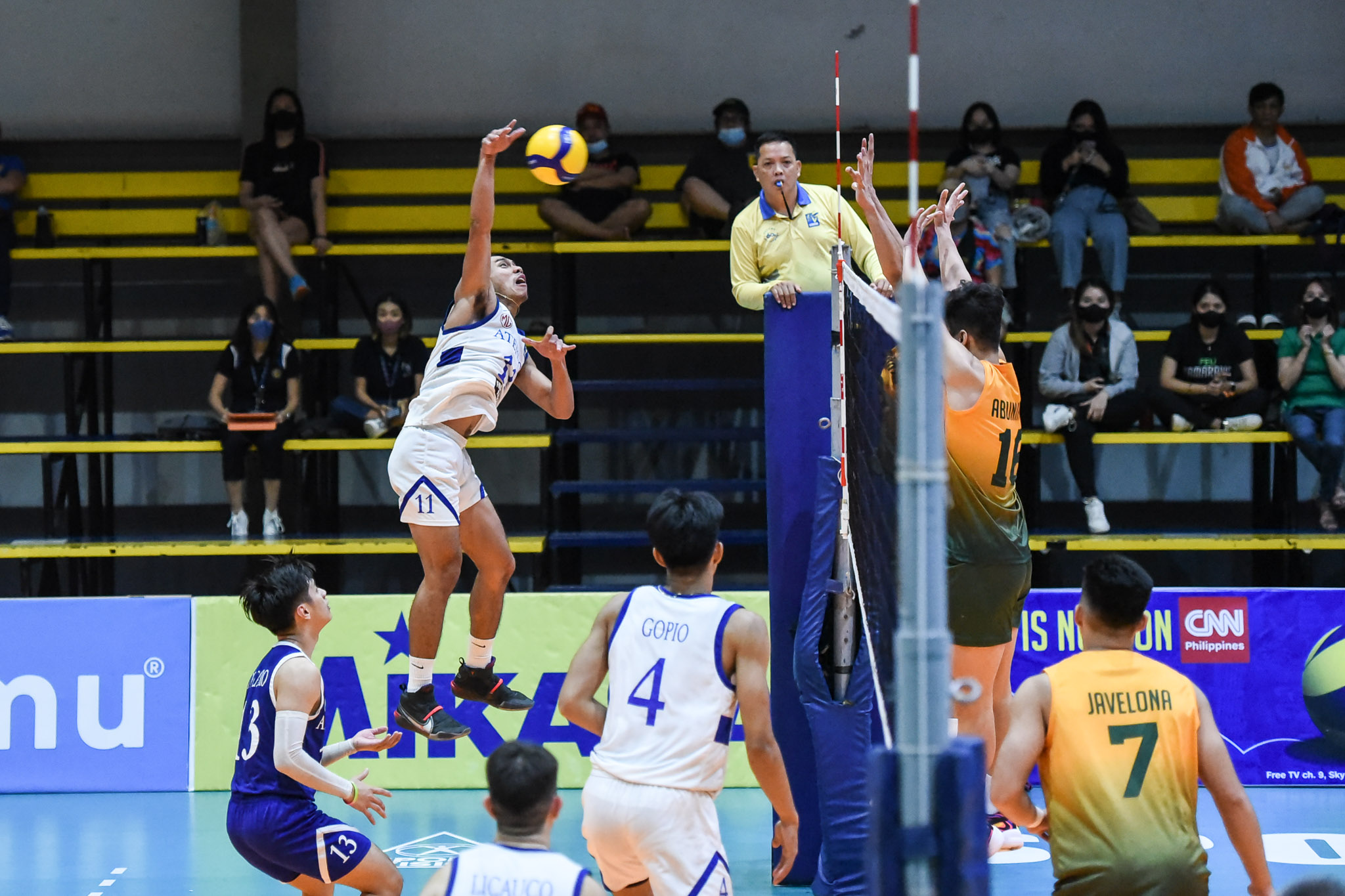 The opening set loss to the Blue Eagles was attributed to their lack of functional defense. Both of Ateneo’s external batters struggled due to the lack of good first balls, allowing the FEU to easily take advantage of their slow start. The Tamaraws then performed successful combination plays and took an early lead against the boys in blue, 14-20. FEU further tightened their block, while the Blue Eagles failed to provide enough cover to the net, ultimately leading to the Tamaraws’ first set victory, 19-25.

When asked about what was missing from the earlier parts of the game, Ateneo Setter James Licauco explained: “Parang wala kami sa sarili (We didn’t feel like ourselves). I feel like not everyone moved the same way, and we got quiet during the first set.”

Unable to improve their defensive rhythm, the Blue Eagles struggled to activate and cover the left wing in the second set. FEU was able to maintain a four-point lead and approached the second half of the set at 12-16. Then open Hitter Abai Llenos cleverly adapted to FEU’s blocks to sneak in a few kills for Ateneo, 17-18. In an effort to get the ball back and chase FEU’s score, Llenos stepped up and blasted through FEU’s blockers, 24-23.

After ramping up their playing speed, a closer tie between Licauco and open hitter Ken Batas brought the Blue Eagles to three set points. After trading points through powerful attacks, Kalle Blomstdet gave the Tamaraws a taste of their own medicine with a monster block to eventually claim the set, 28-26.

With the momentum on the Blue and White’s side, Llenos and Batas chose to increase the speed of Ateneo’s attack, which also resulted in an improvement in their defenses. The team from Katipunan maintained a comfortable lead over the Tamaraws and effortlessly took the third set, 25-18. Riding on the energy of their open spikers, Ateneo’s center blockers Jett Gopio and Charles Absin activated quick strikes from Licauco’s perfect sets to get some kisses over FEU in the fourth set, 12-8. The Tamaraws struggled to keep up with Ateneo’s quick attacks, which allowed the Blue Eagles to use a succession of kills to win the game 25-21.

Player of the Game Llenos told how their preparation for the match against FEU went. “We watched their game against San Beda and given the statistics, FEU is the number one blocking team,” he said. “We knew that’s the power [they were] hold, but we were able to see a weakness in that particular strength. We maximized that weakness and we were able to win the game.”

The Ateneo Blue Eagles will try to maintain their perfect track record in their next game against the University of Perpetual Help System DALTA Altas this Sunday, November 6 at 1:00 PM at the Paco Arena in Manila City.